Smart charging for the people! This idea led to the creation of Easee, a Norwegian tech company specialising in EV charging, spearheaded by Jonas Helmikstøl. We had a chat with the founder.

Smart wallboxes for all

Jonas and some of his fellow colleagues previously worked in a competing company. The product they developed was well suited for housing companies and the like, but it wasn’t scalable for single-family homes and private individuals. They also noticed that all the chargers sold to private individuals were not ‘smart’ enough, these were basically traditional chargers that had no load balancing or smart energy control, which would have led to challenges for the power grid in the future. “We saw that smart wallboxes were going to be super optimal in the future, both for the customers and for the globe. That's why we simply couldn't sit still. We tried to lobby the idea to our company, but we were not heard. We decided we were going to do this anyway, we kind of got a ‘charger calling’,” says Jonas. This calling made him found Easee, along with Kjetil Næsje and Steffen Mølgaard.

The Easee wallbox makes it possible to charge electric vehicles in a 'smart' way. This means that as an Easee and Tibber customer, you'll be able to charge the car at times when the energy price is at its lowest*, and balance the load in the grid (if you have Tibber Pulse**) – making sure that the main fuse in your home doesn't overload.

Jonas claims that Easee's recipe for success is the way they work. They don't work with strict deadlines, but rather ensure that things are done in the best way possible. Everyone has confidence in each other and has ownership of the things they do. “At Easee we have no hierarchy, it's the best arguments that triumphs, not the title”, says Jonas. The company also builds its product from scratch, which is not common in the industry, as the safest option is usually to imitate existing products to a certain degree. “It is too common to just look at what competitors are doing, what everyone else is doing, instead of thinking about what the customer actually wants, and to produce that,” Jonas emphasises.

Wallboxes are not exactly known for being beautiful, and are often just dull looking … boxes. Easee is in a completely different category. Design has been in their focus from the very beginning, and Jonas emphasises the importance of having a compact product that is also nice to look at. “We work with someone who, in our opinion, is the world's best designer, additionally, I can add that we’re also very inspired by Steve Jobs and Apple. I dare to say that there are many similarities, at least in terms of design”.

Most of Jonas’ time is dedicated to Easee. You could say it's his hobby too. As mentioned, the people are the most important factor behind Easee's success, and this is also where Jonas gets his energy from: the people. “The good conversations with colleagues, friends and families definitely give me the most energy. Noticing that you are inspiring people, that you can be a positive influence in other people's lives. You could also say that exercising gives me energy, but I'd much rather have a good conversation than a good workout,” he says and laughs.

At the end of 2017, Jonas and Kjetil met Tibber co-founder Edgeir Vårdal Aksnes in Bergen to present their ideas. And it turned out they shared a lot of similar thoughts and ideas (we can assume that this was one of the good conversations that gave Jonas energy). Tibber highlighted the need of a smart charger that could be controlled to charge when the energy was cheapest. “It was really a perfect match. Following this, we simply decided to do more together. It was really quite an exciting and demanding process in many ways, and we’ve also gotten to know each other well – in both good and bad ways,” he laughs. Easee has also made some adaptations by request of Tibber during the development of the wallbox itself. The button on the front of the wallbox is one example. It allows you to override the smart charging without picking up the app, and was something Tibber wanted implemented. The companies work together on a daily basis, and the knowledge sharing has been extremely important for both parties. “We started on version 34 of the software last year, now we are on version 220. It’s based on feedback from our customers, and small and big things we have made of adjustments”.

Believes in the rapid growth of EVs

“I think the EV market is going to grow much faster than anyone believes – myself included,” Jonas replies when asked about the future of electric cars in the Nordics. He also points out that one of the potential bottlenecks is charging, and believes that growth will slow down if the charging infrastructure is not good enough. Poor charging infrastructure is a showstopper. Tibber and Easee can make sure that there are no bottlenecks in the grid, that the energy is distributed in an optimal way, which Jonas thinks will be of high importance. He believes that a great deal will happen in the years to come, especially in Norway. “At the moment we see that funds are being released to develop new battery technology, new charging technology and so on. When a country like Norway sees economic or commercial opportunities, magical things happen”.

The future is exciting

Speaking of magical things, Jonas can reveal that there’s a lot of new and exciting things coming from the Easee in the future. First out is the ‘Equalizer’, which will work quite like the Tibber Pulse – a ‘heart rate monitor’ for the home. Secondly, they plan to launch various hardware to control the larger energy sources in the house. Hold on to your hats, as we’ve saved the best for last. It’ll not be released any time soon, but perhaps in a few years: “It's a product we call ‘Easee DC’, hehe. It runs on DC charging, perhaps better known as fast charging. It’ll initially be a product aimed at public charging, but eventually, you’ll be able to get an Easee DC in your own garage,” says Jonas. It’s a fast charger for the people. We think this sounds very exciting, plus we’re also very fond of the name. 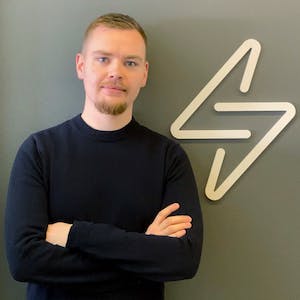